Race 1 saw Wayne lead in the early part of race, but having wet tyres on a dry track meant that all he could manage was a creditable 8th position. In race 2 Wayne wins after a red flag ended proceedings, whilst Wayne was passed just prior to the red flag the race was taken back one lap. Wayne finished 2nd overall for the round and moved up to 4th in the Championship.

It was a weekend of triumph and tragedy for the Yamaha Racing Team as they contested round two of the Australian Superbike Championship at Goulburn’s Wakefield park, over the weekend.

The weekend started off on a sour note when Glenn Allerton crashed early on in practice leaving him with a broken arm. Allerton high sided at turn 10 and was then taken to Hospital where it was determined he had broken his arm in two places and required immediate surgery.

“I started to straighten the bike out then started to let go of the brakes to turn in,” explained Allerton. “I then put my balance and weight forward and the backend came right around and flicked me over the handlebars. I landed on my elbow pretty hard as I broke my humerus bone in two places really badly.”

Allerton’s doctors are predicting that he will be out of action from eight to ten weeks, which means he will miss the next round of the championship. However, if everything goes well the three times Australian Superbike champion should be back for round four, which will take place at Darwin’s Hidden Valley Raceway, which will take place on the first weekend of July.

“I just don’t know where I really stand at the moment as the injuries are so fresh. I just have to give myself some time to heal and then see what is actually going on with my arm. If my arm is good and I feel strong on the bike when I do some practicing at Sydney Motorsport Park, then I’ll go to Darwin,” Allerton ends.

In contrast to Allerton’s weekend, Wayne Maxwell was able to keep his championship hopes alive after taking home second place for the round with 8-1 results.

With unpredictable weather all weekend as showers came and went throughout, riders and teams were taking educated guesses for the right tyre set up for race one. When Maxwell left pit exit for the sighting lap the track was partly wet, which saw the 2013 Australian Superbike champion leave on wet tyres. However once the red lights went out for the twenty lap race the track dried out completely.

Maxwell led for the opening two laps, but later slipped down the running order due to racing on wet tyres. Maxwell picked up a respectful eighth position, scoring 13 championship points.

“In race one you were in control of the Gods,” said a happy Maxwell said. “It could have rained and I could have been a hero, but it didn’t. Unfortunately, that’s the way it goes.

“I’m happy with the result. If I had gone out on slicks and it rained and I dropped another race in regards to a DNF, our championship would have been over. So, to take eighth and take the points is a positive thing.”

In race two, Maxwell again got a good start and managed to capitalize on it. He went about just settling into a rhythm and led the race but soon came under pressure from Cru Halliday. It then became a three rider battle when Troy Herfoss joined the lead group but just as things were reaching a climax, Halliday went down hard and the red flag was bought out.

With Maxwell leading the last completed lap before the red flag, he was awarded the race win and managed to claw his way to second place for the round and now sits fourth in the championship.

“The guys at Yamaha Racing Team gave me a fantastic Yamaha YZF-R1M this weekend, considering our lead up has been a bit hectic. But credit to everyone on the team who has worked so hard to get things back on track for us and hopefully this is the start of our championship climb.

“On top of that it was tough conditions this weekend with rain coming and going every five minutes just made it that much harder for everyone but we made it to the podium and it’s a nice little reward for the team.

“We are going to take the positives from this weekend and move onto Winton, Maxwell concluded.

Round three of the championship moves to Winton Raceway in Victoria, a track that Maxwell as done well at in the past. With Allerton on the sidelines, there is no official decision on if a guest ride will be on offer as the team will get a full assessment of Glenn’s injury before making any decisions.

Reflecting on the weekend, Team Manager John Redding said; “It has been an up and down weekend for the entire team. Glenn’s crash has certainly hit the team pretty hard, as we only had one rider in Wayne for the round.

“Then the tyre choice in race one didn’t do us any favours at all.  Wayne certainly got off to a good start, but definitely wasn’t the conditions to be racing on wets out there. He fought valiantly and went above the call.”

Race two we got some luck due to the red flag and that’s the way racing works some times. We managed to tighten the points up a bit and we just have to keep chipping away at each round and make inroads into the deficit we found ourselves in after Phillip Island,” Redding ends.

Yamaha Racing Team will head to Winton Motor Raceway on the 11-12 April for an official ASBK test, before returning to the 3.0km circuit just outside of Benalla on the last weekend of April for round three of the championship. 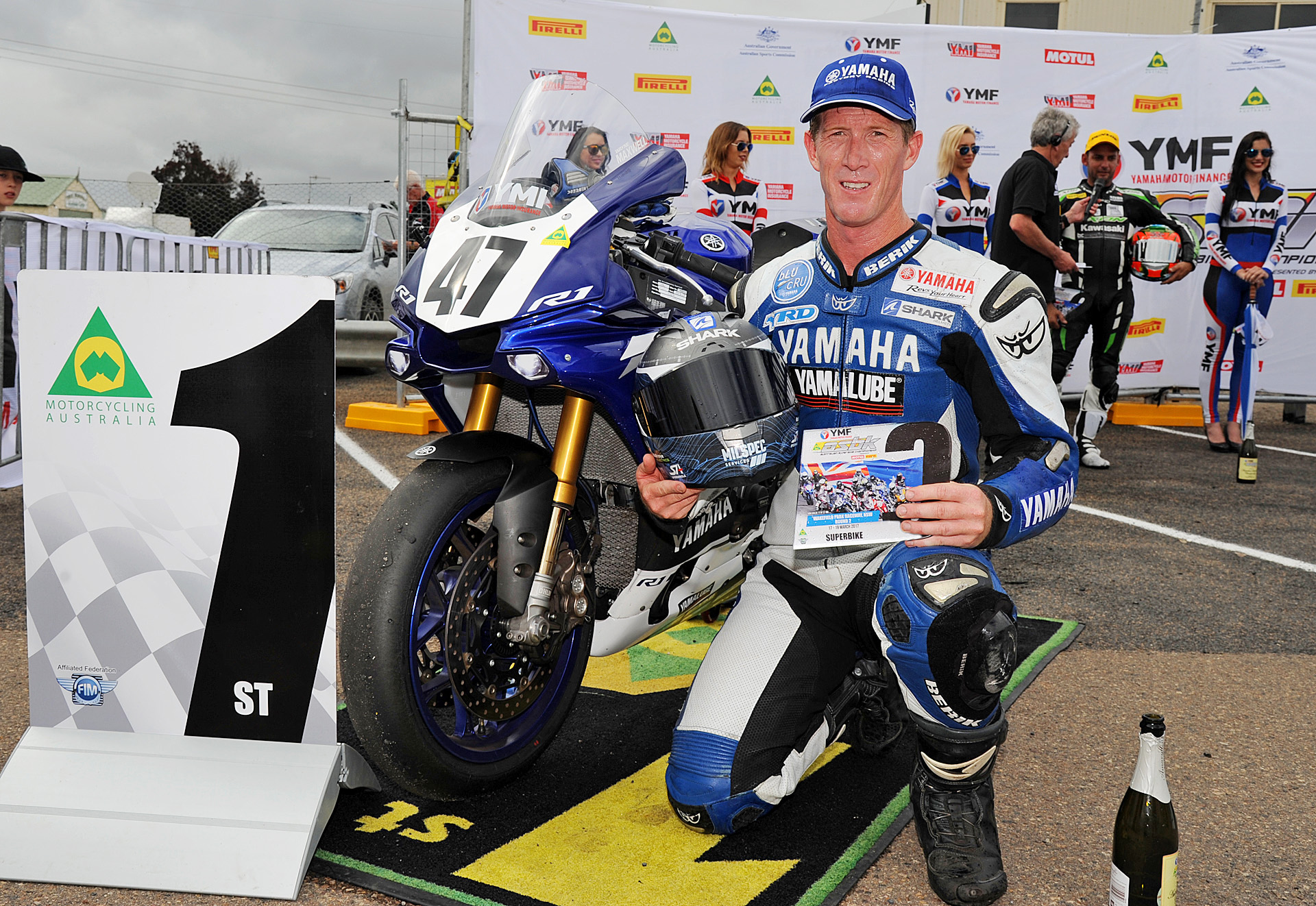